How writers use their experience of illness

On my way to school on winter mornings, when the cold caused my juvenile arthritis to flare up, making it feel as though knives were being jabbed into the soles of my feet, I would think of Hans Christian Andersen’s little mermaid. Remembering how she was condemned to live with the sensation of walking on broken glass didn’t make the trudge from the bus stop any shorter, but it did provide a strange kind of comfort. It helped to know that someone had written about what I was experiencing. As my classmates strode past, seemingly immune to any kind of discomfort, the story reminded me that I was not alone.

When I got older and decided to make writing my day job, I realised I had company in other ways too. Looking at many of the names on my bookshelves – from Marcel Proust, who completed Remembrance of Things Past on the sickbed he kept to for the last years of his life, and Emily Dickinson, who described the eye affliction that prevented her from reading as being like ‘eight months of Siberia’, to A. L. Kennedy, a veteran of recurrent bouts of labyrinthitis – it struck me that long-term or recurrent illness was a common theme in many of their biographies.

We wordsmiths, it seems, are a sickly bunch. But while a great deal has been written about the link between creativity and mental illness in the past thirty years, ever since a 1987 study identified a higher-than-average incidence of bipolar disorder among writers teaching at the University of Iowa Writers’ Workshop, less ink has been spilled about the impact of physical health on the story-making process. So what, if anything, is the link between writing and chronic illness, and how does bodily suffering shape a relationship with words?

Practical considerations undoubtedly play a part. When you inhabit a body that hurts when it moves, has to be confined to bed for long stretches, or renders certain pursuits impossible, you inevitably gravitate towards activities that minimise physical exertion. Reading is an obvious way to while away the time. It also has the advantage of allowing you to escape and forget yourself. As a child, I can remember long, happy hours spent under the spell of writers such as L. M. Montgomery, Noel Streatfeild and Enid Blyton, whose stories were as good as anaesthetic for my aching joints — at least as long as the pages kept turning. From this vivid engagement with the imaginary worlds of others, it felt like a natural progression to begin to create my own fantasy realms. In this sense, for me, necessity was at least partly the mother of invention.

What’s more, the isolation that physical difference often brings about can play a role in honing the observation skills required for good writing. Excluded from many of the activities that others take for granted, those who live with chronic pain – perhaps especially those who do so as children – frequently find themselves watching from the margins at precisely the moments when their peers are most vigorously engaged in the business of living. While most children hurl themselves into sports days, playground games and activity parties, those with physical limitations often sit out and observe. For this reason, they can become very good at noticing important details — or telltale signs. Indeed, this fact was not lost on one of the most influential figures in another field that also relies on good observational skills (and one which also boasts its fair share of authors, among them Graham Greene, John Le Carré and Aphra Behn): espionage. As Henry Hemming writes in his biography of British spymaster Maxwell Knight, M, a large number of agents selected in the early decades of MI5’s existence had been outsiders during their formative years, often because of illness.

As well as sharpening powers of observation, the sidelining effects of long-term physical impairment can foster a creative approach to scenarios that many able-bodied people never stop to consider. If you are continually having to find ways to use objects that don’t align with your capabilities – handles that don’t yield to your grip, fastenings positioned where you cannot reach them, wrappers not designed with sausage digits in mind – you start to see that the way we organise our lives and society is the result of a series of choices; that what is is merely one of a myriad possible manifestations of what could be.

For people in the business of making things up, such an insight is invaluable. Practised in imagining alternative ways of negotiating everyday scenarios, those more limited by their bodies than most arguably have an advantage when it comes to dreaming up fresh approaches and narratives. For many of us, it simply comes with the territory.

Sometimes illness itself can be mined directly for storytelling. While memoirs such as Paul Kalanithi’s When Breath Becomes Air paint vivid portraits of their author’s experiences – and may become a form of coping mechanism – many fictional accounts of pain seem to have drawn on the sufferings of their authors. For example, in 2005, a study by Dr John Ross of the Caritas St Elizabeth’s Medical Center in Boston claimed that the harrowing descriptions of Winston Smith’s wasting and torture in 1984 owed a great deal to George Orwell’s struggle with tuberculosis.

Even where the experience described is not directly comparable with the real-life condition, it seems likely that living with illness may deepen writers’ capacity to imagine extreme situations. Navigating what, in her memoir Giving up the Ghost, endometriosis-sufferer Hilary Mantel calls ‘the unlit terrain of sickness, a featureless landscape of humiliation and loss’ takes people to dark places, territory storytellers may be able to revisit and shine a light on in their work.

Familiarity with physical pain can even make it easier for authors to empathise with characters in situations markedly different to their own. For example, when developing the character of an eighty-seven-year-old woman for the novel I have just finished writing, I found myself going back into my childhood memories much more often than I projected myself forward in time. While I could only imagine what it must be like to have been on the planet for nearly nine decades, I was able to remember how it had been to live with what is typically an older person’s condition. My recollections of the way, at the age of eight, I used to brace myself before I got out of the car or bath in anticipation of the pain that would grip my feet and knees unlocked that character for me — even though the final draft makes little mention of these actions.

That said, it’s worth noting that using the recollection of suffering to inform writing is rather different from trying to put words on the page while in the midst of the crisis. Although being able to recall discomfort may be useful for an author, pain itself is rarely conducive to much at the time it occurs. Martin Amis, who has been a martyr to dental caries for much of his adult life, may write impressively about ‘the expert musicianship of toothaches, their brass, woodwind and percussion and, most predominantly, their strings’ in his memoir Experience but the force of his descriptions also suggests that he would not have been equal to constructing them while the agony was at its peak. Just as, according to Wordsworth, poetry has its origin in ‘emotion recollected in tranquillity’, so writing about suffering is probably best attempted once the analgesics have done their work.

Ann Morgan is a writer and editor. Following the success of her project to read a book from every country, which led to a TED talk and the non-fiction book Reading the World, Ann continues to blog about international literature. Her debut novel Beside Myself has been translated into nine languages. 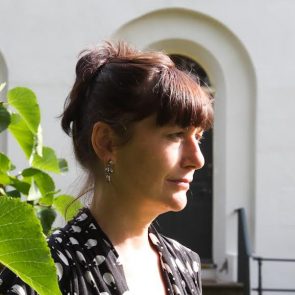 Martina Evans speaks with Julia Copus about her work as a hospital radiographer, the influence of dream lives, and why she’s said ‘no’ to fiction.