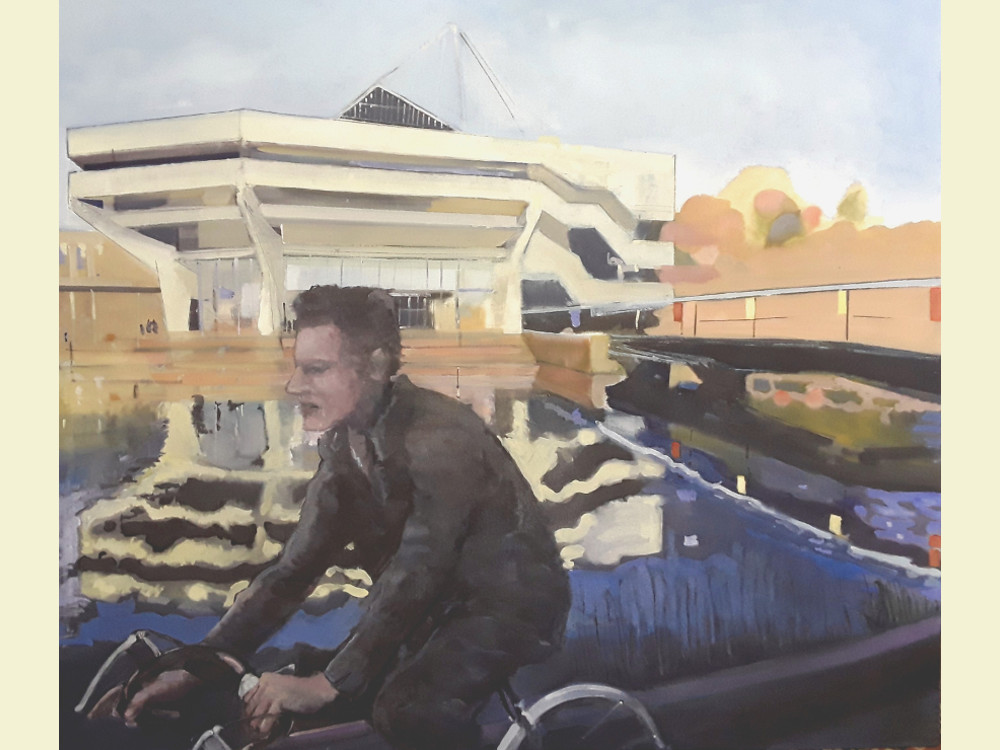 As in painting, so in poetry

I am a painter and a poet. At art college, many years before the rise of creative writing courses, I learned the craft of painting. Much of this has, in the jargon, proved a useful set of transferable skills for poetry.

As both figurative painter and poet I’m fascinated by form. There’s a certain cross-fertilisation as images, both verbal and visual, aim for precision and concision. I’m not much interested in expressing myself; I am interested in depicting how the world looks, sounds and feels — what Plato and Aristotle termed mimesis or ‘representation’. This includes the stuff of paint and words themselves: the way paint can catch a face, gesture or breaking wave, and yet still be a splash of salmon pink or cobalt blue; the way a word can crunch or slither, while clicking a couplet shut.

I like to keep my hand in drawing. Sketches are my way into tackling a large canvas. In my work, I often move between the visual and the literary and both approaches tend to form sequences. By this I mean a series of works connected by a common subject, theme or form: cityscapes or portraits, say, or sonnets, elegies or a group of poems which constitute a narrative. As well as illustrating my poems, I’ve nodded to the Renaissance tradition of ekphrasis by writing poems about famous paintings by, among others, Botticelli, Watteau, Hokusai and Australian aboriginal artists, as well as responding to photographs and less-classifiable contemporary video, installation and performance pieces.

An idea can often go in either, or both, directions. For several years, I collaborated with artists and writers on a series of commissioned projects. In Under Travelling Skies, I responded to Philip Larkin’s Hull through poems, paintings and a short film. Larkin famously disliked what he called ‘the myth-kitty’ — often a fertile area for my poems. My collection Trans worked variations on Ovid’s Metamorphoses, with poems on celebrated mythological paintings and a sequence on bodily modification as practised by, among others, Enigma, a circus artist who had horns implanted in his skull, and the performance artist ORLAN, who had undergone surgery to resemble legendary women portrayed in Renaissance art. Horace, in Ars Poetica, uses the phrase ut pictura poesis, ‘as in painting, so in poetry’, to emphasize that poetry is the equal of the visual arts in terms of depiction. In Under Travelling Skies, I used paint (and a lot of other stuff) to have a little joke on Larkin’s down-to-earth bicycle-clipped aversion to myth, having him drunkenly wheeling his bike through a series of landscapes populated by Bacchus, fauns and satyrs while Botticelli’s Venus rose out of the mud under the Humber Bridge.

As in painting, so in poetry, but there is a big difference between a visual and a poetic image. I’ve made several film-poems, and I’m conscious of how what works in one medium may seem too bluntly literal in another. The screen may crassly amplify what words have more subtly encouraged in the mind’s eye. What I think my painting and poetry do have most in common is an interest in composition in both senses: how ideas are conceived and developed, and how parts relate to the whole; in other words, ‘form’.

I rarely make one-off poems or paintings; there’s usually some sequence, connection or progression: a narrative begging the next episode. For the last few years, I’ve painted cityscapes, often of Hull with its architectural mix of Victorian municipal, glass box anonymity, post-industrial dilapidation, and the elegant harp of the Humber Bridge. I like the glinting shark’s fin of The Deep aquarium seen through the huge gantry of the Tidal Barrier looming like a guillotine above the mudbanks. More recently I’ve moved further afield and concentrated on crowded public places: city squares, railway stations, commuters at King’s Cross.

Everything starts from observation. Photographs in various weathers and light conditions move to sketches; odd lines jotted in a notebook become couplets, stanzas; then the long gestation of ‘composition’, manoeuvring shapes and lines (of images in both verbal and drawn senses) into place. A poem’s lines are easily rejigged; you notice this, then that, but you can change the sequence. The visual world is less accommodating, but I’m not above moving buildings a little (a very little!) better to fit the composition. The glimpse of The Deep mentioned above needed to be shifted a few inches to fit it under the arch of the Tidal Barrier, while keeping that gantry’s most imposing vertical aspect. This brings us to form.

In a sequence, one of the main formal considerations has almost certainly been previously decided. I’ll have already stretched and primed my canvas and enjoy this meditative part of the preliminaries. For the cityscapes I’ve been working to a landscape size of 40″ x 50″. The large proportions work well for panoramic views — and, importantly, still just fit in the car. In poetry, metre, rhyme scheme and general shape have been partly decided during the drafting process, though it’s probably more accurate to say that these have already been unconsciously decided, as a rhythm or a rhyme imply potential development. Solitary lines, maybe couplets, usually come out well-formed, like a finished though enigmatic component to fit into a machine that hasn’t yet been invented.

To engineer this machine, I have the template of traditional forms to hand: from the concision of the sonnet, to the interlocking rhymes of terza rima or the lolloping narrative drive of the ballad with its alternating three- / four-beat lines. Quite often I like to vary the form within a sequence, a change of tempo or tone. The click of rhyming couplets can clinch an argument or provide the punchline to a joke. Chains of couplets or ballad metre can provide the motor for narrative, and often open up the space to develop characters and action.

Form can also shift within a poem. The pressure needs to build, but there’s a satisfaction in breaking rhythmic, tonal or genre constraints. Similarly, it’s exhilarating to let paint explode on the canvas, or follow a fortuitous drip. I admire ‘painterly’ effects which seem accidental yet catch a moment of light or a gesture; paint which both represents and yet still looks like paint: both face and splash; splatter and hedge. In a similar, almost random, way metre and rhyme can delineate the forms of a rational, neo-classical world, yet also facilitate unconscious associations.

Rhythm lulls the reader or, better, the listener, into a dream-like state through which hypnagogic images flit, connecting previously disparate things. In painting, shapes echo each other, colour works tonal variations and harmonics. In both poetry and painting, form is organic, less a corset than a pattern whose growth connects parts to the whole.

Form can be informal. It can also, in both poetry and painting, shock. Just as sudden juxtapositions can not only reveal subtle connections but disrupt too-easily won felicities and genre expectations – the question-mark of worm peeping from fruit in a seventeenth-century Dutch painting – so it’s satisfying to crash out of verse’s metronomic or stanzaic constraints, or elude the dictates of full rhyme with a slant to assonance. Shock is satire’s stock-in-trade. It tends to simple verse form, preferably with a strong rhythmic pulse emphasised by rhyme. Delighting in bizarre juxtaposition, formal regularity clashes with the monstrous shapeshifting of its often hypocritical targets; the pleasure lies in the tension between formal restraint and the outrageous content.

Satirical verse (and it is almost always primarily verse, rather than poetry) usually relies extensively on the neatness of rhyme to sharpen its point. Satire is often a rational and formally conservative genre that ironically takes the grotesque and undisciplined for subject matter. The lines look formal, but the world is upside down, and etched with a savagely sharp pen. The contrast is turned up loud. Sometimes the form itself invites its own destruction. Though, before that happens, it’s very satisfying to let the rhythm, often a thumping four- or five-beat line, chug along the tracks of rhyming couplets. When the steam gets up, it’s almost as if the poem is writing itself; the unconscious takes over as poem veers into almost hallucinatory, often grotesque, images. Satire has much in common with dream, especially nightmare. The trick then is knowing when to break off, reassert control, return to daylight and reason.

For me, whether painting the city or versifying hypocrisy and vice, it’s about image in rhythm and proportion: in other words, form. Whether the line is visual or verbal, form echoes content and vice versa: ut pictura poesis.

Cliff Forshaw’s poetry collections include Vandemonian (Arc, 2013), Pilgrim Tongues (Wrecking Ball, 2015) and Satyr (Shoestring, 2017). RE:VERB is due from Broken Sleep Books in 2022 and French Leave: Versions and Perversions in 2023. http://www.cliff-forshaw.co.uk/index.shtml 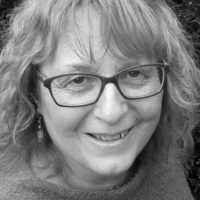 Stephanie Norgate speaks with Jane Draycott about dramatising the life of a pioneering undercover woman journalist, giving voice to the collapsing landscapes of West Sussex and her out-of-doors childhood in Gilbert White’s Selborne.

Maggie Butt (also published as Maggie Brookes) speaks with Ann Morgan about the transition from being a published poet to an internationally published novelist, the resilience writing requires and the challenge of choosing a pen name.

Stephanie Norgate explores her practice of keeping notebooks, relishing the 'unexpected jewels' they produce, and shares her fascination with the notebooks of other writers and the remarkable insights they can provide.